All of us have an inner critic (or two); but unfortunately, when you have a job that entails sitting down alone for long periods of time and writing, the voice of that critic likes to fill the silence, and does it very well.

With some writers prone to depression or mood disorders and the tales of past famous authors in using alcohol to get through the day, there’s little surprise in my suggestion that tackling and controlling our inner critics is a core habit all writers should work on.

In this two part post I discuss the inner critical voice that nags us with doubt and guilt, questions our abilities, and laughs in our faces. People have a thousand names for this creature: inner critic, inner demon, the monsters, the voices, the inner editor, gremlins, monkey-on-the-back, monkey-writer, or Colin (mine). Here, it will be mostly referred to as the inner critic.

Why Do We Have an Inner Voice?

Sigmund Freud described the personality or psyche in three parts: the id, the ego, and the superego.  The id is often portrayed for us as a little devil on our shoulder, the superego as the angel. When it comes to hurtful critical remarks, however, it’s actually the superego doing it – masquerading angelically as “wanting the best for us”.

As very young babies, we didn’t have the superego – we were all id, all about survival and our needs: food, shelter and care. As we grew, we learned to form an attachment to our caregivers, who – in return – taught us that certain behaviours were “good” and rewarded with what we needed, and others were “bad” and possibly punished.

These learnings developed into a conscience of others, and an ego identification of good and bad – our superego. The superego’s job is to learn and enforce society’s norms – “should”, “have to” and “must”. Its voice becomes loud and punishing if we don’t behave and get what we need as children, reinforced by those around us.

In between the ID’s needs, and the superego’s must-dos sits the mediating ego. The ego likes the status quo. Which isn’t so great for creative types, who need to work (write) in a world of change.

Even though we know of the existence of the inner critic and understand its function, most of us can’t make it shut up.

Why can’t we shut our inner critics up?

The inner critic is there for good reason: to protect us from doing stupid things, making social faux pas, and to give us secondary gains – a hidden benefit from a problem.

As an example: that inner voice telling us we are incompetent writers, and questioning why we would even fathom writing that book – are protecting us from putting our writing out there in public and possibly being rejected. Nobody wants rejection.

The other benefit (amongst many) of listening to our inner critic is to save ourselves work. Writing – and any other ideas – takes change: change in our working process, in our mindset and in how we approach the world.

And change is hard. We all know that.

Hence a writer’s ability to comply with the inner critic’s desires and getting stuck.

Despite these negatives, having an inner critic is a good thing…mostly. Those who don’t have a strong superego nagging at them, are the one percent of our population who are sociopaths – they are giant id’s walking around, with enough superego knowledge of right and wrong to manipulate their way through a society of curtailed egos.

And, we, as writers, actually can profit from those critical voices – just not when first writing. But when it comes to editing and revising – heck, yeah! Bring on the critical demon on our shoulders.

Inner critics and voices have their uses, just at the right time. When it’s the wrong time – when we have a deadline to meet and a draft to write – that’s when we need to control our inner critic, without conquering them completely.

“Abuse your muse. If it takes electric shocks, thumb screws, waterboarding, then so be it. The muse works when YOU say, not the other way around”. – Lamar “L.R.” Giles.

For those writers stuck waiting for their muse the idea of having to control our muses may be a strange one. But I’m including this concept here alongside controlling our inner critics, because the exercises in Part 2 of this post are effective for both controlling, or calling on such beasties as we need them. 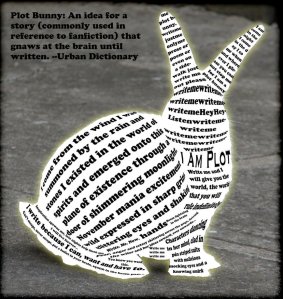 Note that several writers I know don’t believe in muses. I’m one of them. As much as I enjoy the idea of a Greek semi-goddess with a toga and gentle motherly voice gifting me ideas, muses just don’t arrive when I expect or need them. They are, at best, fickle and cantankerous creatures, not worth remaining stuck over.

“Ideas are like rabbits. You get a couple and learn how to handle them, and pretty soon you have a dozen.” — John Steinbeck

Too many ideas can be another problem from an overactive muse. That’s where things like plot bunnies*  come in.  Too many ideas, just when you’re meant to be focused on writing one of them – and the result: nothing.

* Plot Bunny : An idea for a story, usually referring to an author having more ideas than he or she can use. Source.

How do we Control our Inner Critic (or Muse)?

There are many blog posts and crafting books from writers and creative coaches on this subject.

In Part 2 of this post you will find the Exercises for Controlling your Inner Critics (and Muses too).

I list a few exercises which have worked for me before, in controlling or calling for the inner critic or muse when I have needed to do so. Some exercises are logical, others more fun or quirky. I suggest you try a range out, see what fits.

This blog post participated in April 2013’s Blogging from A to Z Challenge, along with many other blogs on subjects as diverse as writing, foodie blogs or mummy blogs.

This blog post is part of a themed series or pack on Writer’s Core Habits. I acronym this as WCH or WCHP © . Do a search for these tags, and you will find more in the series.

No affiliate links are used in these posts.

Leave a Reply to J. A. Bennett (@j_a_bennett) Cancel reply