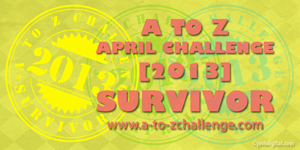 My reflections on the Blogging from A to Z Challenge of last month, word by word – A to Zed:

17 thoughts on “#atozchallenge A to Z Reflections”