Some tasks are easy to prioritise – they must be done first because other tasks lead off, or are dependent on their completion. But others aren’t as easily prioritised and ordered into our days.

Today’s posts look at some productivity systems which can help in decision making and prioritisation of work tasks. At the bottom, some tips also.  And being a #52Tech post as well, naturally there are a couple of good apps for that.

The idea of measuring and combining two competing elements of Urgency vs Importance into a matrix has been attributed to both former US President Dwight D. Eisenhower and Dr Stephen R. Covey.

Covey brought the idea into the mainstream and gave it the name “The Urgent/Important Matrix” or “Time Management Matrix” in his 1989 business classic The 7 Habits of Highly Effective People. (Habit 3).

The book has several derivatives (for kids and business people) and also, an 8th Habit book. This book is a mindfield (I meant to say that) of productivity hacks and has already been mentioned in this productivity fortnight series.

The Eisenhower / Urgent-Important Matrix is a valuable tool for decision making, and task prioritization.

Via Mindtools, here is how you use the matrix –

Covey says to stay out of the bottom III and IV quadrants (labelled by Mindtools as Distractions and Interruptions) regardless of urgency. He also tells us to concentrate on the most important, rather than most critical.

Quadrant II (Important but not Urgent) is the heart of personal management – it can be used effectively to shrink down the burden of crises found in quadrant I also. Making sure we have plenty of time to do tasks which fall into this quadrant (labelled ‘Focus’ is one of the sample matrices below) will ensure us progress towards our goals.

Note that a lot of these matrices are drawn with the axis around opposite ways, meaning the quadrants identified in the first graphic above are placed in a different order on the grid. If you are using ready-made grids or software, check out what each quadrant actually means. Two more examples are below. 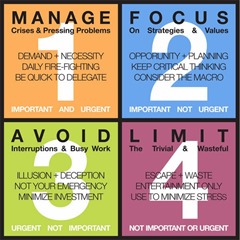 Urgent or Important? The Definitions

Urgent tasks require immediate attention. These are the to-do’s that shout “Now!” Also known as the crises. Urgent tasks put us in a reactive mode, one marked by a defensive, negative, hurried, and narrowly-focused mindset. Many of these can not be avoided (always) –things like a screaming baby, for instance.

Important tasks contribute to our long-term mission, values and goals. Sometimes important tasks are also urgent, but typically they’re not. When we focus on important activities we operate in a responsive mode, which helps us remain calm, rational, and open to new opportunities. Getting important but non-urgent tasks completed will often, as Stephen Covey suggests, also work to limit the amount of things that move into crisis mode.

But…The Argument for Urgency for Prioritisation

The urgent important matrix has a lot of power and recommendations behind it. But basically the matrix emphasizes that doing tasks based on importance is the best method (and working on urgent tasks as emergency priorities is not the best way to get things done).
But, the opposing side to prioritising towards importance also has its pundits. In The 1 Minute To-do List, a free ebook available from Michael Linenberger, prioritising by urgency is argued.
Linberger points out that the classification of important is very subjective –

It might be important to your boss…[Linenberger lists many more importance criteria].

The problem is, nearly any task can be labeled impor-
tant based on one of these measures. Asking yourself “Is
this important?” will yield a “yes” answer to way too many
tasks. So, we tend to put a lot of things in the important
category—the high priority.

Linenberger’s 1 minute to do list system is based on urgency instead. He has only three lists to create –
The first is a list of to-do’s you must get done today first thing or else someone or something will suffer. The second is a list of to-do’s to be achieved as soon as time allows, within the week. The third are non-urgent tasks.
If the critical now list includes important tasks (however measured) it likely can also be a MIT task list. If it includes tasks which aren’t necessarily enjoyed, it falls under the Eat that Frog principle of getting the worst tasks over with. Big work based tasks which are critical to do now also fall under the Big Rocks first principle.

Often it’s difficult to decide priorities between multiple tasks or options. There are several tools which can be useful in this.

This tool is often used in a long list of options, where each is rated against another. The most highly rated option makes it’s way to the top of the list. Often done on a spreadsheet, this involves going down each row and moving it up or down the line as it is compared with the next item – which can be painstaking work. Another perhaps easier method is to write each option up onto a strip of paper or index card, and then to manually rate each up or down in order.

A third method is discussed at Mindtools, and involves a table format where each option is listed across vertically and horizontally, and each rated against all other options for importance and a numerical factor of differences in importance. For more details, see the mindtools page.

Mindtools also provides steps in using a decision matrix, a method often used by businesses in comparing various product or service options they are looking at purchasing. Decision matrices appear publically as feature comparisons of products or services like insurances, cars or software packages on comparison or supermarket type websites.

In decision matrices, different options are rated against each other using factors. Each factor should be easily recognisable – like cost, feature comparisons, location proximity, payment options. If it’s not a readily available comparison (like cost) then the factors could be rated by weighting via perhaps a sliding scale of 1-5 or 1-10.

Effective vs Complex Tasks: Want a very quick set of factors for prioritizing tasks? – this article talks about listing all your tasks, then rating them by two factors – effectiveness (towards the actual end-goal)and complexity. These are scored from 1-10, the sum of both scores is then averaged. The end result is a prioritised list, showing you the least complicated but effective tasks to work on – the quick wins.

Hitting Emotions: We know that we will be more successful if working on tasks which mean a lot to us – keeping an eye on the end result (in a passionate goal) helps with this. This article highlights using emotional factors – of how we will feel when completing a task – for prioritization. More on using our emotions – and energy levels in the further reading section below. 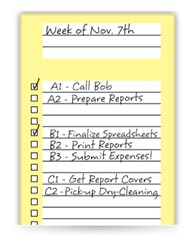 I almost forgot to document the whole ABC approach – it’s such a prevalent technique that it hardly requires discussion. Yet…it’s actually an example of a quite subjective gut-feel method.

In the ABC Method, we simply take a list of to-do’s or tasks, and go down them to give them an A, B or C: A for most important, must be done today; B for should be done today; and C for not important, but nice to do’s. If you have more than one A, then you stick secondary ordering onto it with numbers 1-3 typically.

When you drill down on this, you realize that unless you’re doing this prioritization with other people in a brain-storming session, you’re basically basing this ordering on your own expertise and gut-feel of which is most important. With such a method, however, you can draw on previous experience, and workflows.

MoSCow – Must Should Could & Won’t

The MoSCow Method is a business analysis permutation of the above must-should-could/nice, adding in a Won’t also. (The O’s in there are simply added to make the whole thing pronounceable).

This method is typically used in software development, to prioritize – or reject – software requirements, but the approach may also be useful for general option prioritization. Again, it’s based on an expertise and gut-feel of what each option should be. 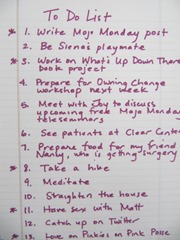 Sometimes the whole gut-feeling subjective prioritization thing can actually work for us – especially if you have a small list of tasks which appear of equal importance.

Say, you follow the MIT or even big rocks system (see below) but then you have a list of 1-6 tasks you have decided need to be done first – but which one first?

In these cases, some people use symbols to denote their next prioritized task – they may draw an asterix against a task, or stick up a check box ready to be marked off. These starred privatizations can work well if we are confident in our own knowledge and expertise.

This approach fits a handwritten to-do list or journal list quite nicely. (See the Week of Journaling series for several journal examples). When taken into digital apps, to-do lists with stars on items are typically used to indicate those of most importance or priority.

Productivity Tip: Paring Down All Those Decisions

We live in a busy world. All those decisions, day by day, hour by hour. But not all decisions are made equal. And decision-making is a wearying business. In fact, scientific studies have shown that we only have a certain amount of decision-making energy available to us. To get through life, we need to work on paring down all those decision making requirements, to allow focus on what actually counts.

Take a tip from some of the greats, people most of us would consider very productive:

Steve Jobs and Barak Obama both decided to not bother “deciding”  what they would wear day on day. Jobs is famous for wearing the same black turtleneck and blue jeans “uniform” for years. Obama said:

“You’ll see I wear only grey or blue suits…I’m trying to pare down decisions. I don’t want to make decisions about what I’m eating or wearing. Because I have too many other decisions to make.”

Albert Einstein famously had little bother over what he wore (or how he maintained his hair), but also over finding his way home across campus (on his way to an important meeting, Einstein telephoned his wife and asked, “Where am I and where am I meant to be?”). He was also a rebel against authority, so possibly chose to rankle his fellow university professors by appearing at functions wearing dress shoes but no socks, for instance.

An App for That

Of course there are apps for that. And this is a Friday #52Tech post, so here are a couple of my favs for this.

Eisenhower App – an iPhone app which offers a matrix, task count function, and focus mode where you can set a timer on your most urgent or important tasks. The app is $3, but also cloud syncs to a web database, which is freely accessible.

Priority Matrix App – for iPAD, iPhone, Mac or Windows and Android plus a team collaboration version for business.

This is one of my own current favourites. Not only does it offer an Eisenhower matrix, which allows for priorities, icons, due dates,and progress reports, but there are several other quadrant matrices available, and you can create your own with your own labels. (I use one for high-level planning of a fiction series, and email the matrices content out to myself or my Evernote account direct).

The iPAD app is FREE, but if you want to use across platforms, you’ll need a subscription.

#52Tech: This was Week 29 post in the #52tech goal – to investigate and share one technology post once a week for 2014. You can find all the posts indexed via the #52tech tag, or top menu option at hunterswritings.com