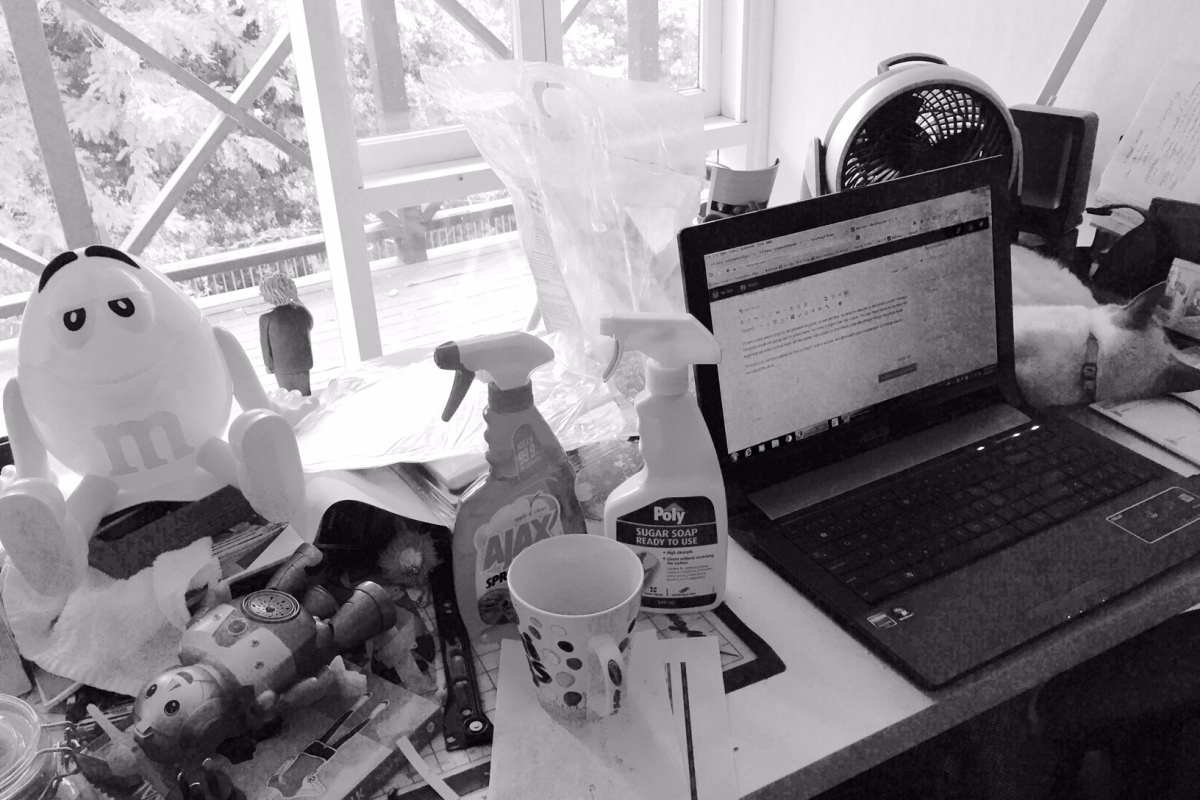 Welcome, 2015. It’s been a few weeks since my last personal blog post. My absence was due to the typical summer holidays / Christmas break and going back to school havoc over the past month.

Through it all, I’ve been editing my first (second?) draft of a novel, and at a snail’s pace (maybe even something slower), renovating the study.

I think I’ve come to an understanding. I previously didn’t believe that the state of an office desk could really negate a person’s productivity. Contrarily, I did believe the artist’s ideal – that a messy environment could mean more inspired creative thoughts.

That was before the renovation began.

Last year I worked in a study with a reasonably uncluttered desk (okay, sometimes), but surrounded by untidy cluttered bookshelves and units, most inherited by the previous house owners – the large desks and cabinets in this room were simply too large to move out, so they left them.

This worked for me, because my desk looks out through windows and doors over the treetops and into some Aussie native bush. It’s like having my dream treehouse — without the step ladder, but with a nearby toilet and easy coffee supply. I could avoid seeing all that untidiness while I worked.

Come the new year the drip-fed snail-pace reno has begun. Gone are the inherited cabinets – each took a day to dismantle – and I have completely blank walls, awaiting wall-paper stripping and painting. It’s so empty in here that the room echoes on any noise.

But – with my desk being one of the only remaining solid surfaces in the room, it’s being used to hold many miscellaneous items. The image with this post shows the desk, but does it an injustice in detail. There’s everything from my laptop, to a jar of metal bits off the old cabinetry (good to make found object robots (fobots) one day). There’s a cat asleep to the side of the laptop, a fan for the heat-wave days, some spray n’ wipe and spray sugar soap for the walls, screwdrivers, brushes, notebooks, curtain rails, oh, and a solar-powered bobble hand Einstein – which will make an appearance in the novel I’m meant to be editing.

Before Christmas – I managed to rewrite and edit my first draft through completely, bringing the novel to about the second to third draft on macro edits.

But not very much actual rewriting or writing.

I’ve also organised meetings, volunteered myself for parent representation at the school, and organised family diaries full of sports games, pickups and dropoffs, debating trials, animal vet visits, and a whole bunch of other stuff.

All done sporodically and very briefly through this newly messy desk.

It’s an easy math’s equation. Messy desk = messy mind. And lack of productivity on the real job at hand. I can’t seem to be able to sit down at that messy desk for too long (good for my waistline, I guess).

But! As I’ve avoided the messy desk I’ve also found a new lease of creativity.

Exploring editing and  writing craft advice at this point in my revision process works – I’m through the major structural changes (I think) and have a lot of great ideas to make the story much better and stronger.

“Reading, after a certain age, diverts the mind too much from its creative pursuits. Any man who reads too much and uses his own brain too little falls into lazy habits of thinking.” – Albert Einstein

Importantly I try to browse quickly through all those reading resources I’ve found – browsing lets me form my own ideas more quickly than in-depth study – and then I need a little time (a day, sometimes a week) to properly ideate (or stew on) what my new learning means to my own story.

You will therefore find me whilst in this middle-ground editing phase, taking what looks like a great lot of time off – even stealing a few naps, or driving and waiting to pick-up my daughter from school (when she could be walking) – naps and driving (and washing dishes) open up my muse. Slowly those fresh ideas are making their way into the story.

Although my soul is crying out for a clean white uncluttered desk, there I am. Editing, rewriting and actually loving it. Who would have thought?

Messy Desk = Messy Mind (lack of productivity) or More Creativity? It appears to me in my own personal process, that both theories exist in parallel, that a truly messy desk may well cut down in bum-on-seat productivity but also allows more creativity outside of it. The secret is moderation, as always.

Sometimes when we read about editing and how to do it, we are told that the first draft is the creative draft – just write and get it on the page; while the editing phase is the more logical analytical phase – where the inner editor is allowed out. Again, I think both have a role within those first edits, at the macro to medium level.

“The intuitive mind is a sacred gift and the rational mind is a faithful servant. We have created a society that honors the servant and has forgotten the gift.” – Albert Einstein.