Here’s a modern name for an archetype which comes originally from mythic stories. The Initiate can be an individual, or a group archetype, and is often linked with an archetypal plot point, that of “The Initiation.” 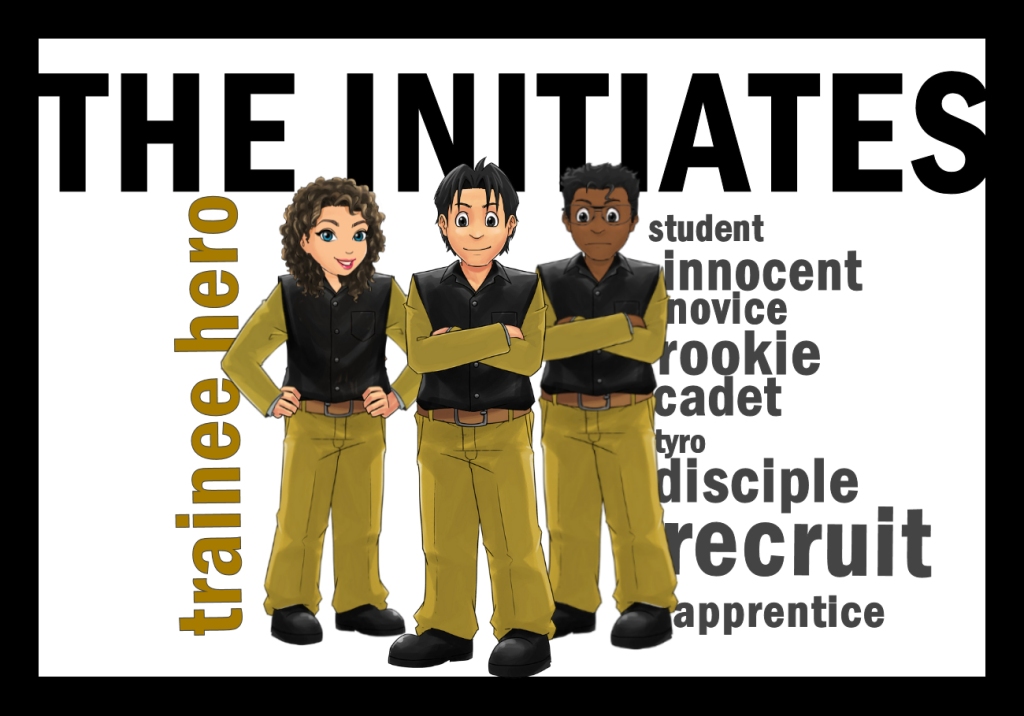 In fundamental structure, the initiate as archetype, is a newbie member or signon to a group or world view but hasn’t reached a level of acceptance into that group. To be accepted they must learn the language and skills necessary to act in that group or world, and must pass a sequence of initiation events.

The initiate in story is primarily the trainee hero and protagonist. They must undergo this training and transition period before entering the full hero arc but during their initiation they will have opportunities to show the hero they will become.

This is a group of initiates who enter their new world at the same time, and often have to train, learn and practise or undergo group tasks and trials together as a group before being examined towards acceptance. At this initiation point, the groups of initiates become individuals – some may fail the initiation and be kicked out of the group, others may pass.

Initiates, as a group archetype, are often cyclical meaning that a new group of initiates / candidates / pleebs etc will enter the new world annually, or periodically once that world is ready for them. In the YA genre this is often age-related, in other genres there may be an intake or qualification period.

Group initiates are often denoted as being different from full members of that world – often by having to wear different uniforms. Quite often the initiates are also pitted against each other in competition to win their full membership by subsetting them into smaller groups, with different wardrobes again.

The term “tasks or trials” mentioned above points to one specific archetypal story structure that will often have initiates as trainee-hero characters – The Hero’s Journey  will start with one or more non-heroes who must pass an initial entrance event (linked with an inciting incident) and step over the threshold into the new world – where they will then have to undergo the training, learning and tasks and trials of the initiate, through a mentor, before the final initiation task allows them to take up the full Hero mantle.

The Initiation is a situational archetype.

Initiations can be many types of events – from an examination of knowledge or skills, to a series of tests and a final heroic task to test their mantle.

The initiation is something which happens over a certain time period at the beginning of a story. It shouldn’t be confused with something that specifically happens to end the initiation period and allow the initiate to cross over into the new world as a fully fledged member.

That specific end point can be found in modern, dystopian Young Adult and urban cultures – something like an Initiation Ceremony or Judgement into a Varsity Collegiate, or sports team, a final competition or games, a ritual or ceremony.

Overall, if it’s a successful initiation as part of the full storyline, then it is normally the point in story where the adolescent comes into his maturity but then has a new awareness and bigger problems, or the internist is accepted into the world, but suddenly encounters worse problems than he experienced under the guidance of his mentor – and he’s alone now. This is their rite of passage.

Mulan (Mulan) is an initiate in the Chinese army, William Turner (Pirates of the Carribean) must learn how to survive in a world of piracy, Daniel (The Karate Kid) is initiated into the competitive world of karate by an initially reluctant mentor Mr Miyagi. Luke Skywalker is mentored by Obi-Wan and Yoda into using “The Force” (Star Wars). Tris is initiated into the skills and world of the Dauntless faction (Divergent series).

Other Names and Associates

Note that the initiate is typically a young or trainee hero type and therefore the protagonist of the story.

Structure and Universal Story: The Hero’s Journey or Quest (Often there is a Stage called the Initiation, which comes before further trials and tribulations) and a Coming of Age story feature initiates, crossing thresholds and rites of passage.

Associated Archetypes: The Mentor  – every initiate needs guidance (for more on mentors see the F post in this series), The Innocent  / Fool – an initiate’s start point and The Hero  – an initiate’s end point but the start of the Hero archetype and arc.

Other Points of Archetypal Reference:

The Shadow: the shadow of an initiate hero is a rejected hero already in the new world. This is somebody who was previously initiated, then rejected but still wants to be that hero. An example as villain also, is Scar, who was the shadow to young Simba in ‘The Lion King’ – both wanted to be king, but went about it very differently.

5 thoughts on “Character Archetypes – I for the Initiates”