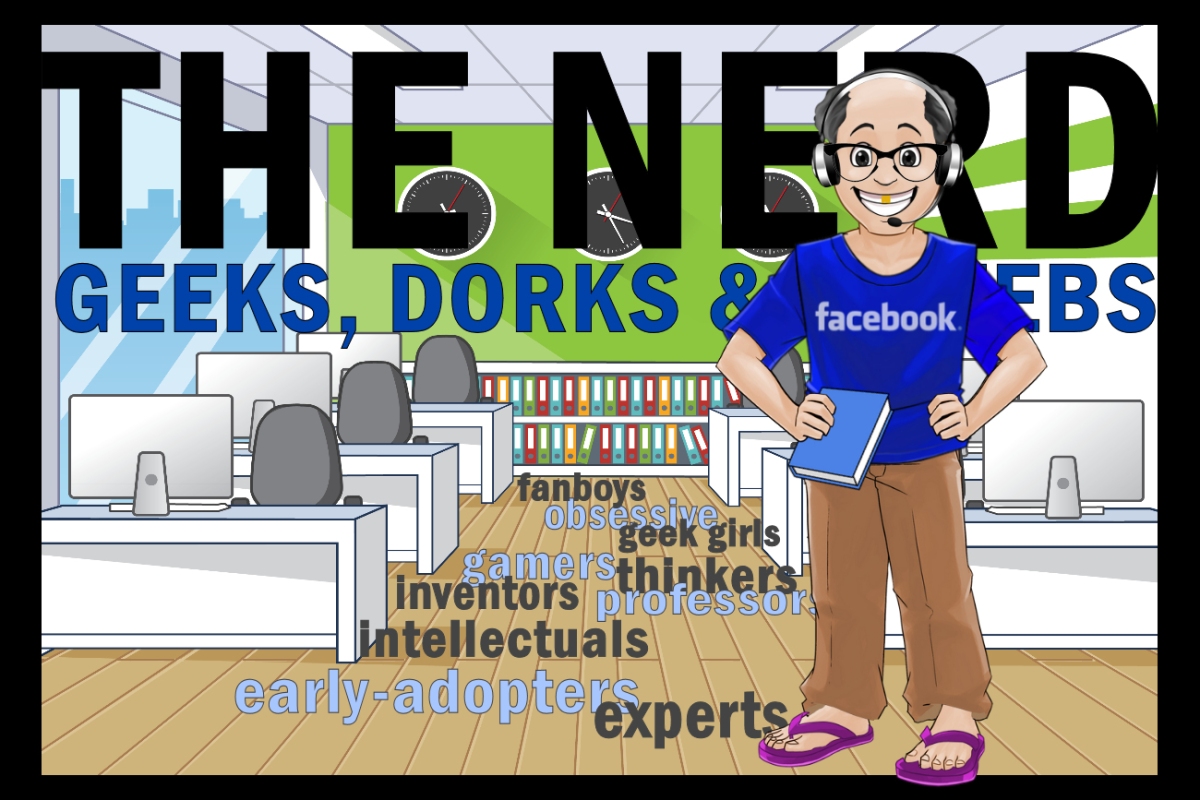 The Nerd as modern archetype, is one often confused with Geeks, Dorks and many others. So, I’ll deal with all of these. 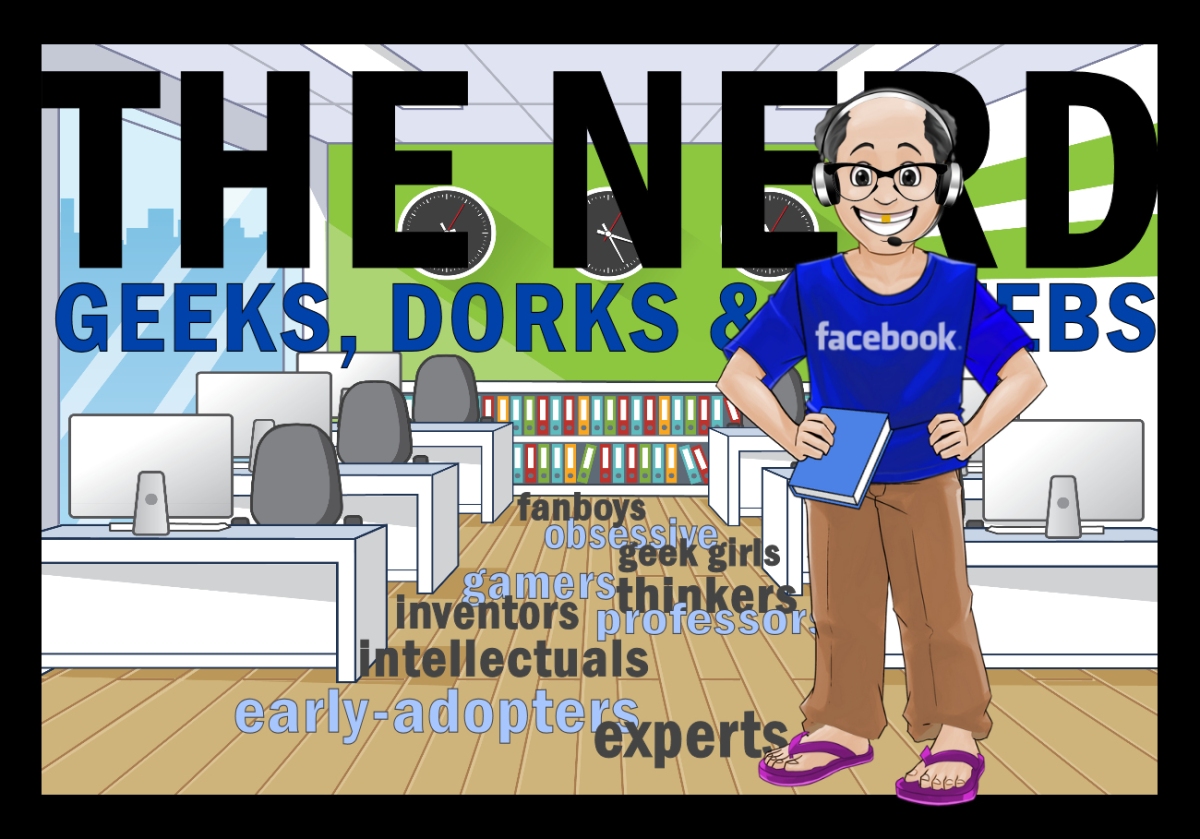 The Nerd, The Geek, and more

“Be nice to nerds. Chances are you’ll end up working for one.”

What’s the difference between a nerd or geek? This debate has been as long-going as the two terms themselves. Some suggest one is a subset of the other, while others say they are very different.

The nerd made it’s first appearance in a Dr Seuss book, ‘If I ran the Zoo’. This was a bizarre animal with wacky hair, but aren’t they all? Listed with a ‘nerkle’ and ‘seeksucker’ we can only summise that both of these are also nerd types. The slang meaning dates back to 1951 when Newsweek magazine used it as a synonym for “drip” or “square”. It became slightly cooler, taking on a teenage trope through 1980’s movies like ‘The Breakfast Club’ , where one of the characters was differentiated as “the brain”.

The geek , etymology-wise, can be traced back to the 14th Century German word, geck, meaning court jester, freak or fool, and later, a dupe or person who can be duped.

At some point in modern times, both began to mean more than slightly wacky or off-centre, but also meant a person who has some intelligence.

Then we have the dork, commonly believed to mean a whale’s penis, but etymologists now suggest it came from the German dirk, meaning a thrusting dagger. Like the now off-trend dweeb, the dork has a slightly different meaning in archetypal form. The dork is somebody socially or physically awkward, perhaps even a little stupid rather than having a higher intelligence.

Differences Between Nerds and Geeks

It would be fair to say that if you designed a character with most of the traits listed below, most of our readers wouldn’t be able to tell the difference (or care) whether this character was called a nerd or a geek. Or both. But there are subtle differences.

A few years ago software engineer Burr Settles studied the words “geek” and “nerd” as used in 2.6 million tweets. He then extrapolated the words most associated with both, and produced a graph. 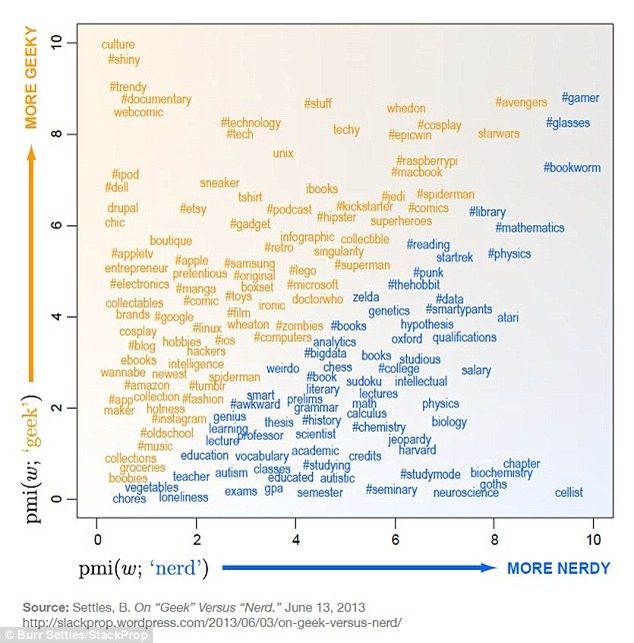 After analysing the words linked to each, Settles said –

But before we get het up about stereotypes again, Settles added –

“Of course, geeks can collect ideas and nerds play with stuff, too.

“Plus, they aren’t two distinct personalities as much as different aspects of personality.”

With the success of Bill Gates and Stephen Jobs, the nerds and geeks of the world have moved from shirked and unpopular to being very much accepted, or expected. The best Ivy League schools in the world are now full of preppy students who aren’t just class leaders and successful sports competitors but also are expected to have the high intelligence levels and cultural likings of the geek or nerd. This is a great book to read on the cultural implications:

The Geeks Shall Inherit the Earth: Popularity, Quirk Theory, and Why Outsiders Thrive After High School by Alexandra Robbins

But note that nowadays nerds and geeks are no longer outsiders. In fact, anyone who works in the more analytical professions such as scientists, mathematicians naturally inherit the nerd moniker, while the success of Gates and Jobs means business entrepreneurs now often take on the mantle of geek.

This whole movement of geek and nerd from a subculture which some were proud of to something much more mainstream may well see a change in the archetypes as yet. With everyone now claiming they are nerd and proud, time will tell.

Still not sure? That’s perfectly understandable, given there’s a great overlap. This Goodreads list holds over 300 books which people consider hold geek or nerd characters. Try this Venn diagram found at the Great White Snark (of course, even this diagram is hotly debated). 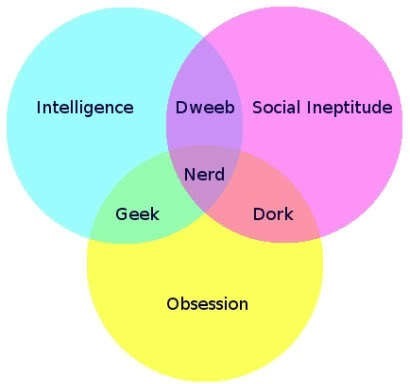 Creating the Nerd (or Geek) Archetype

Before creating this modern archetype, pinpoint your objectives and roles for the character. Are they a mentor, a sidekick to a hero, or the hero themselves? What flaws are they going to have? What area of expertise will they have? And what won’t your extra-smart character know about or be capable of doing?

Then consider the story patterns which circle the nerd or geek. In essence these archetypes are intelligent and knowledgeable. Play around with the tropes: Knowledge is Power, and The Power of Words. Add the ‘With Great Power comes Great Responsibility’ quote attributed to Peter Parker’s Uncle Ben (Peter being the ultimate example of classic puny nerd to superhero) and then the age old belief that Power can Corrupt.

‘Knowledge is of no value unless you put it into practise’ ~ Anton Chekhov.

Prompt: How do all these quotes affect how your nerd will act and perform through the story?

Tip:Stay away from stereotypes. Cast your nerd or geek with only a couple of the traits listed below. And if you do feel the need to give your nerd or geek glasses, make sure there is a medical reason for them (which is easy, if they use computers all day) and that this is also used as a flaw sometime (geek loses his glasses and can’t see something important).

These days being a nerd or geek has become such a popular claim that there is a large and forceful culture your nerd may well sit within. Any large group like this, however, can provide several areas of conflict or concern.

Consider the very current real life outrage by some ribald fans when Captain America was outed as a double-agent for Hydra. The writer of that new comic has received some incredible death threats for destroying Steve Roger’s holy persona. Once he logged off from the internet because of these, a few fans started threatening people who haven’t written or done anything with the superhero for years.

What used to be the domain of solely nerds or geeks – things like superheroes, certain games, and computers, has now been corporatised, serialised and made into products to be consumed. Combined with the anonymity and accessibility offered by the internet, with the large groups which can form around a fandom, and sometimes the nerds can turn: some of them into a base of fandom which puts Stephen King’s Annie Wilke’s to shame as a displeased fan.

Prompt: Consider what your nerd may turn into if something they place emphasis on as a basis for their nerdhood is changed or destroyed. Do they have a sense of entitlement? Or do they move on and enjoy other nerdy things? What part of nerd or geek culture is important to them? 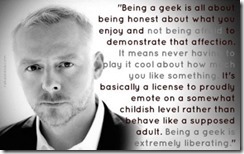 The socially inept nerd taken to extremes can take on the wise-fool archetype, an ancient archetype. Steve Urkel from Family Matters was a good example of this – he was extremely smart in some ways, but completely incompetent and clumsy socially, causing much pain to many other characters. Urkel also gave us the stereotypical braces and really high pants which later became trademarks of the movie franchise Revenge of the Nerds.

Richie Cunningham of Happy Days was my own first memory of the archetype, as a counterpoint to cool dude, The Fonz.

The nerd taken to another extreme can become the cerebral Professor Charles Xavier of the X-Men, or even George Lucas’ archaeologist professor Indiana Jones, who became an action hero. Dan Brown’s Harvard symbologist Robert Langdon in The Da Vinci Code is another example of a nerd (and also geek collector of symbols) turned hero.

Hermoine Granger from the Harry Potter books, fills in most of the boxes as a nerd – she’s studious, always has her head in books, starts off very nerdy looking (although has some make-overs as she blooms into young adulthood), is obviously the smartest of the triad, and was even portrayed as being clumsy on occasion.

This type of character – nerd who will be made over as popular girl or boy, is common in many teenage movies. Examples – She’s Out of Control, She’s All That, The Nutty Professor, and Mean Girls.

The Big Bang Theory muddies many of its characters between geek and nerd, but also is responsible for another wave of geek or nerd pride. Sheldon is brilliant, quirky, obsessive and not shy at all, but he doesn’t care what people think of them. Howard is not shy either, but he does care what people think. Leonard and Raj are shy but want to be accepted by other people. The British The I.T. Crowd did something similar, playing to the trope of normal society distrusting I.T. Support.

Sherlock Holmes is a nerd of extremities – very knowledgeable in many areas, but socially inept, and unpopular with normal people.

Other Names, Associates and Origins