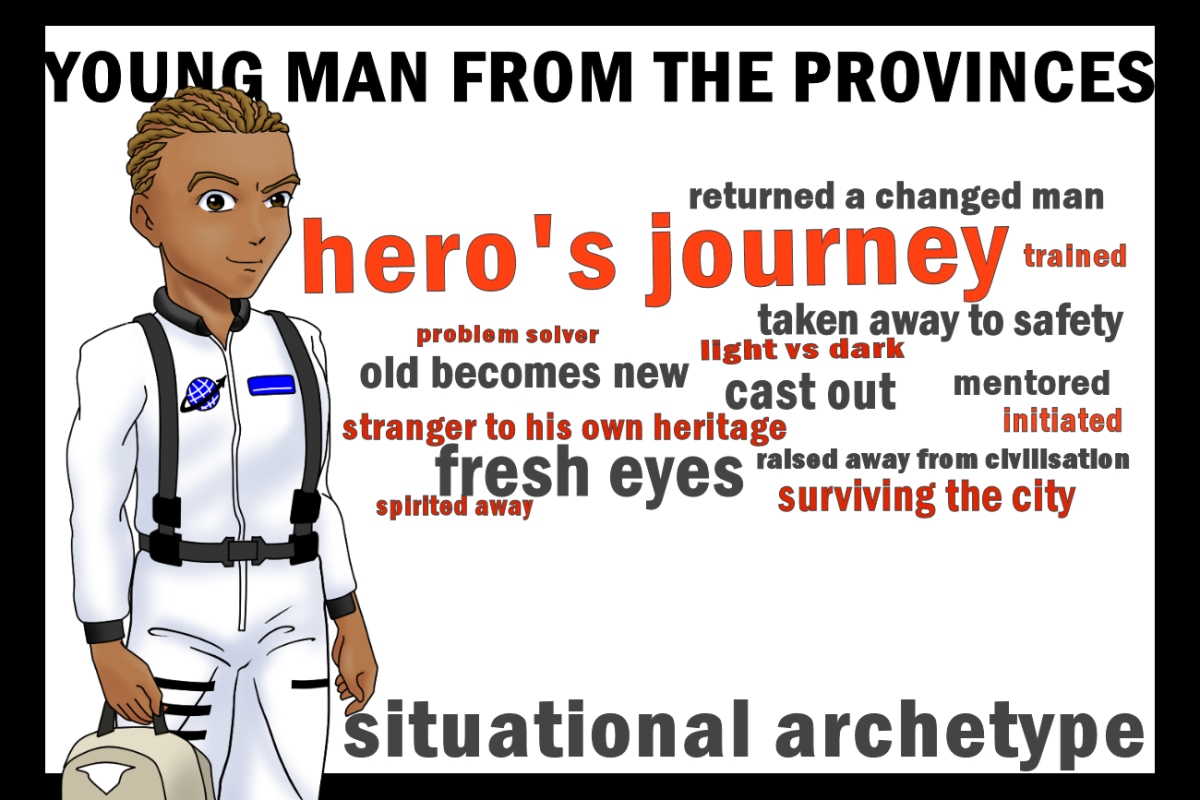 The Young Man from the Provinces is a hero type in a situational story archetype. 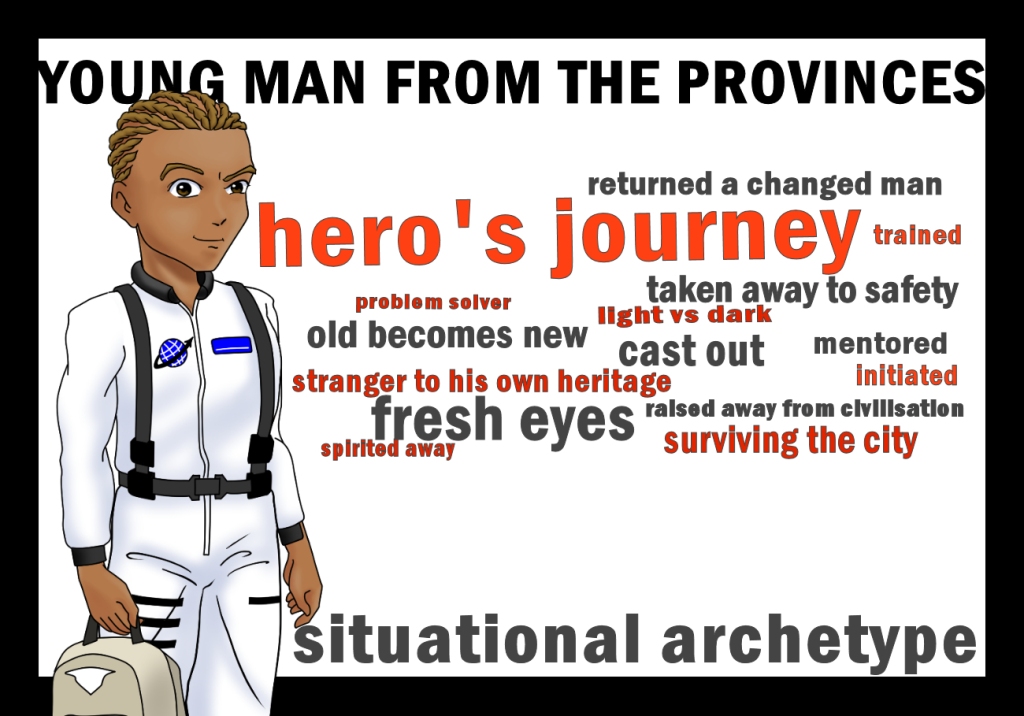 “I return, ready to take my rightful place”~ Young Man from the Provinces Motto

The Young Man from the Provinces is a situational character archetype- about a hero who has been cast out from his normal world and lived and trained elsewhere by strangers, to finally be accepted back into that old world as a hero.

Although he may appear innocent and naive of that original world, and he may initially be judged as being unworthy, uncouth or too barbarian or simple for that world; inevitably his integrity and heroic qualities will teach and inspire others, and provide new solutions for problems, to win that world over.

The young man will often be taught and trained in a country or provincial environment, somewhere where the law of nature or the land will create a warrior with integrity. And his return back to civilisation (the big city or a kingdom) will find a world of confusion, hostility and corruption, in need of an innocent yet skilled hero.

Derivatives of the Mythic Journeys

Lately the Young Man from the Provinces archetype has become a little associated with a young person seeking adventure and leaving their dull boring home to find success or their empowerment. This speaks to the monotony and routine of normal domestic lives. Several songs are held up to identify this adventure calling such as Eminem’s Lose Yourself.

As a brand, the Pepsi advert of a person seeking adventure with Tibetan Monks, is held up as an example. Adventure is a brand archetype which targets anyone with a calling to change themselves or seek enlightenment by means of adventurous pursuits.

Many of our video games feature training of heroes who then go on a journey through various challenges and battles. Facing stronger and stronger challenges and levels, we hear the call to “Power Up.”

Although these are certainly examples of a hero’s journey and coming-of-age, in my opinion they remain a little separate from the true Young Man from the Provinces archetype which sits on a young person being whisked away from their normal world through circumstance and situation, with no choice of their own.

Recognising the Young Man from the Provinces

Example Young Men from the Provinces

Shrek, as an ogre quite happy with his village life, must suddenly take a hero’s journey to face monsters, and ultimately the politics of the big city, and Princess Fiona’s family. He eventually returns with Fiona to his small village, after conquering and improving the kingdom itself, and in his village Fiona and Shrek find they can have the best of both lives.

Tarzan and Hercules were both mythical heroes “trained” in the provinces (or in Tarzan’s case, the Jungle) before being taken back to a civilisation which was both confusing and judgmental of them due to their perceived barbarianism. Tarzan’s jungle upbringing was the result of an accident and his mentors as jungle animals were far from normal.

Hercules, on the other hand, as a son of Greek God Zeus, was sent to complete twelve labours, mentored by Chiron, as a result of some awful crimes. The account of Hercules has been retold through pop culture and skewed, but in essence he was one of Zeuses’ many half-children and the offspring of some parental misdemeanours, and Zeuses’ wife Hera was out for revenge and plotted to have Hercules killed at any chance. In a fit of madness (some say was caused by Hera) Hercules killed his own wife and children. In atonement, Hercules was sent on his twelve labours.

Hercule’s story doesn’t initially sit true to the archetype in that it’s through his own crimes that Hercules must be outcast. However, consider that Hercules was a demi-god himself, who through his own parental origins, was actually outcast as a baby from his heritage as half-god and forced to live in the human world, although had huge strength and the physique of a God. In that human world he took a normal wife, yet above him Hera was doing all her best to eradicate him, and some say had a hand in influencing the choice of seemingly impossible tasks such as defeating the hydra and Nemean Lion as part of his labours.

When Hercules completed his tasks one of his own heroics included setting Prometheus free from the rock he’d been doomed to be chained to for eternity by a vengeful Zeus. As returning hero to the God world, Hercules actually brought the civilisation he’d learned in his human world background back to the Gods, with Prometheus being symbolic of that as the creator of humans (and for giving them fire) in the first place.

Another mythic hero as young man from the provinces is Odysseus. Odysseus, as a boy-king, was sent off to war for 10 years and when he came back he fought the men who were trying to take his throne, on the island kingdom of Ithaca. Odysseus also used his battle knowledge gained in those many years away to originate the Trojan horse.

Dumbo is another account of a young naive elephant introduced to the corruption, commotion and vulgarities of the circus, but able to hold himself above it by his honest spirit and integrity.

After his parents are killed in ‘Batman Begins’, young Bruce Wayne outcasts himself and goes off to train himself, ending up in prison. He then returns to Gotham City, and as Batman, uses his training to clean up the city. If we look at many of the other Batman origin stories from both the comics and the movies, the butler Alfred often appears as mentor to a young and cocky Bruce Wayne.

Alfred’s character provides another archetypal conflict often found in the young man from the provinces situation – the conflict between the innate wisdom of the old wise or experienced provincial man, and the cockiness or educated stupidity of the wealthy, young or supposedly civilised young man.

Although it remains unknown for sometime, as to Luke Skywalker’s real parentage, his is a Young Man from the Provinces story in Star Wars.

Dorothy in The Wizard of Oz, is whizzed away by a tornado, to journey through and learn in Oz, before returning home.

Arthur is another young man from the provinces – as a young boy he is mentored by Merlin, lives a poor but respectable life, before eventually taking his place as King Arthur.

Katniss is literally a Young Woman from the provinces who starts out in the Provinces to a corrupt Capitol, but is outcast into a training ground of the actual Hunger Games arena, before returning as hero to both of her older worlds of Capitol and District 12.

And I’m not sure if any of these 26 posts have managed to not feature some character out of Harry Potter, but in this respect, Harry Potter himself is the proverbial young man from the provinces. Literally “spirited away” (or asparated) from Voldermort’s work as a young baby, he is left to learn how to be a muggle with his Aunt’s family, until the day he is then again spirited away to Hogwarts, his place of heritage. Also, Harry as a literal orphan shows one often-used method for moving the young man away from his old world (kill off the parents) which is seen in several examples (especially in the superhero and mythic genres) above.

In the Lion King, little Simba is another orphan outcast once his father is killed, and his disposed Uncle takes an un-rightful place on the throne. Luke Skywalker, mentioned above, is another example of orphan outcast who doesn’t know his true heritage for some time.

Other Names, Associates and Origins