A few days ago I published “7 Point Structure” in response to an email question. But, over the time in writing and publishing I had returned to my email questioner to ask exactly what was meant – when she talked about 7 Plots, did she mean “7 Plot-points” or did she mean “7 plots as in Master-plots”? The response back was identical to the initial question – she meant 7 Plots. Which wasn’t ideally helpful.

But such is writing – just about everything we talk about has one or two different names for the elements of a story, and sometimes we can’t be clear on what it is exactly that we may be looking for. So here are the 7 Master (or Basic or Universal) Plots.

But then there’s Christopher Booker, who says there are seven basic plots.

And of course, there are also references to seven types of conflict, which could be held up as plots.

So, here are some more resources for those undergoing an initial rough planning session for their novel or upcoming major writing challenge in NaNoWriMo. The 7 Masterplots…and more…

A Deviation to Three

Firstly let me sidetrack to what one of the latest memes around is saying – that strictly speaking, there are only three master or universal story plots on earth. Being a total geek for all this stuff, I collected it. Actually, it’s six, but three of these are mirrors/reversals.  These latest fall right in line with the seven qualified by Christopher Booker also, so if you want more detail, read Booker’s book (haha) or the resources linked to below. 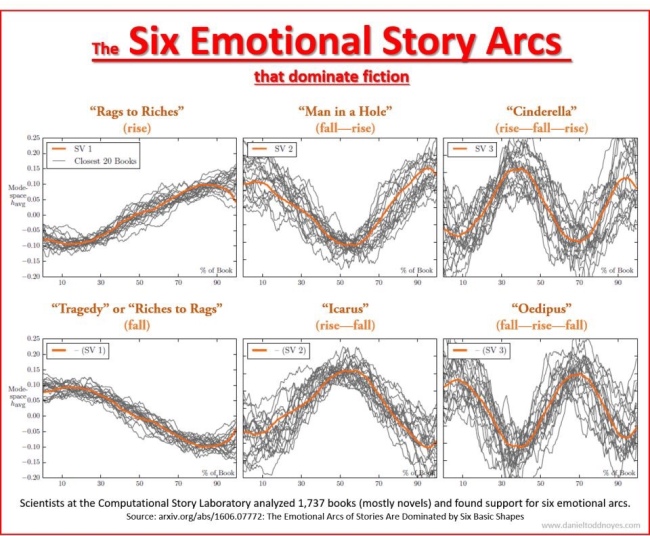 The latest meme comes out of the Computational Story Lab at the University of Vermont, and was released this July (2016 for those reading this later). The researchers used computers to analyse over 1700 books for sentiment and map out these as emotional arcs. These story arcs or patterns are reminiscent of the famous story shape diagrams of Kurt Vonnegut, which were presented back in 1995 in a now famous video where he hand draws the story patterns.

Read the media coverage of these findings here: MIT Technology Review, The Sun UK (credit for the images below) and a more detailed report from the Guardian. 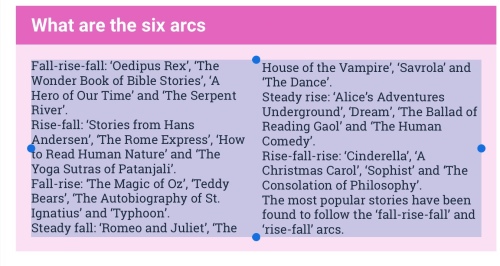 Note the patterns – rise-fall-rise, steady fall, fall-rise-fall. The names for each pattern may differ depending on what expert or group has named them, but the shapes remain the same.

Note also that very similar graphs and six master plots came out in February 2015 by Professor Matthew Jockers form the University of Nebraska, who analysed 40,000 books (reported here by the Daily Mail, or with more detail and links here at Motherboard). Incidentally, Jocker’s sentiment-analysis tools were released on GitHub for anyone to use, and I would guess formed the hedonmeter that the latest analysis from the Computational Story Lab has visualised for us. Jocker broke his own findings out as –

So basically three different ways to fall-rise or rise-fall.

Back to Kurt Vonnegut, then. His initial theories of story shapes was rejected back in his earlier years, but now appears to be mathematically proven.

Here are the story shapes of Vonnegut, curtesy of i09, the story shapes re-imagined by graphic designer Maya Eilam. Note: the video only shows some diagrams. In written format, Vonnegut added two more story shapes. Brainpickings has published these from his memoir.

Another Aside: 7 Basic Themes or Conflicts

Seven is a popular number – sometimes the 7 Basic Plots are confused with themes or conflicts. Sir Arthur Thomas Quiller-Couch nominated these seven master conflicts (or themes) found in story (but they are often called 7 Basic Plots) –

These conflicts can be listed with some different permutations –

Example – Of course, these major conflicts must work in unison and with external and internal conflicts: Most man vs nature stories (in a huge storm, for instance) I’ve watched also include conflict between man vs man in trying to survive, and often man vs. [one] other, in that there is often a figure of authority the main character clashes with; and also man vs. self  – the only internal conflict – all without even getting into the whole main through-line of there’s-a-world-ending-storm-coming-our-way.

The major conflicts are something taught through our school systems, but also often cut down from the seven to either six or even four major conflict types (shown in the diagrams here), discarding the supernatural, technology, God/fate and other permutations, which can logically be represented in these four.

If you have a basic idea of your conflict – or the theme you want to explore – you have a ready-made set of protagonist, the antagonistic force (the obstacle creating conflict) and some story events required to put the two together.

Okay, got all that? Now we finally get to what is known as the Seven Basic or Master-plots. I think of them as Universal – early examples of each of these stories can be found in almost every culture or nation’s ancient tales. 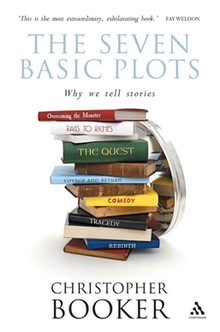 In 2004, Christopher Booker published The Seven Basic Plots: Why We Tell Stories. He’d worked on the theory for over 30 years.

He suggested there were seven types of tales:

In the book, despite the name, Booker actually lists out nine different plots, saying that the final two are more recent in our history. These final two are –

Note that even more recently (in my opinion) rebellion has become a genre almost of itself when you consider the many coming of age / bildungsroman stories in hot demand. The “One” doesn’t necessarily have to be an evil dictator, although many of our dystopian young adults like to have someone like that to rebel against.

Booker also suggests that most of his basic plots meet a Metaplot structure which consists of five stages:-

Most of the Seven Basic Plots are covered in the 3 (reversed makes 6) story shapes above. If you can get hold of the book, you’ll find a lot more detail on each (it’s a big book, and I found it quite dry reading), but there are also resources available on the web describing Booker’s 7 Basic Plots. Here’s a list of some quick resources to download or read to allow you to get on with your own writing –

If you want to map the basic metaplots described by Booker (Anticipation, Dream, Frustration, Nightmare and Resolution) to other plot structures, below is a nice table from How to Write a Novel Now. The metaplot points fit within Michael Hague’s plot points, and across the Hero’s Journey.

3 thoughts on “7 Masterplots or More… [Resources]”